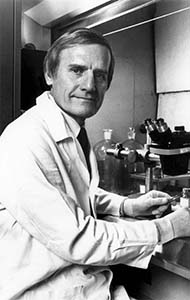 After service in the US Marine Corps, Richard obtained a BA degree in biology from Antioch College (1956), where he was a research assistant at the Fels Research Institute.  Thereafter, he was a Predoctoral Fellow of the US Public Health Service at Columbia University, NY, where he completed a Ph.D program in human anatomy (1959), followed by a National Science Foundation Postdoctoral Fellowship at the University of Bari (Italy) and the Karolinska Institute (Stockholm, Sweden), one of Europe’s largest and most prestigious medical universities.  Dr. Young subsequently received training in the use of radioisotopes at the Oak Ridge Institute of Nuclear Studies (1963) and in electron microscopic autoradiography at the Centre d’Etudes Nucléaires (Saclay, France).  In 1977 he was a Visiting Professor at Wolfson College, Cambridge University (England).

Dr. Young joined the faculty of the Department of Anatomy (now the Dept. of Neurobiology), UCLA Medical School in 1960 as an Assistant Professor, attaining the rank of Professor in 1968.  His primary teaching assignment was in microscopic anatomy, a course which he chaired for several years.  Laboratory research, funded by the US Public Health Service and primarily based upon autoradiography, was applied to questions of cell biology in bones, teeth, the ocular lens, and particularly the visual cells of the retina.

In 1967 he published his seminal paper on the continual renewal of the outer segments of the rods and cones.  It was this contribution and the series of experiments and papers that were a natural consequence of it that not only opened up an entire new field of ophthalmological research and study around the world, but led to Dr. Young receiving the prestigious Friedenwald Award in Ophthalmology in 1976.  (For Dr. Dean Bok’s Presentation of the Friedenwald Award to Dr. Young, click here.)

Dr. Young received several other awards recognizing his teaching and research including multiple UCLA Golden Apple awards, a UCLA Distinguished Teaching award from the President of UCLA, the prestigious Bowman Lecture (awarded every other year since 1885 by The Royal College of Ophthalmologists in the UK), the Verhoeff Lecture of the American Ophthalmological Society, the Charles F. Prentice Medal (the American Academy of Optometry most prestigious award for achievement in research), and an honorary Doctor of Science from the University of Chicago in 1980.

Dr. Young retired from his academic duties at UCLA in 1991, but following his motto of ancora imparo, he continues to follow and actively participate in various aspects of science.  He became dedicated to the topic of human evolution in 1997 and has published a number of influential papers on the subject since then.