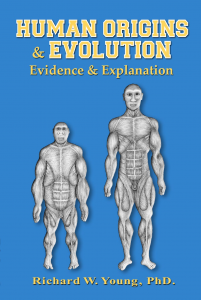 In this provocative new book, Dr. Richard Young addresses some of the most compelling, unanswered questions about human origins and the subsequent five million years of human evolution.

He presents a thorough, up-to-date compilation of the relevant scientific evidence regarding current theories of evolution. However, evidence requires interpretation – an explanation that aids understanding by revealing how a large body of information can be made comprehensible in a simple manner. Dr. Young provides that explanation. He posits a novel way of thinking about human evolution, which he compares to previous explanations, all based on the central principle of modern Darwinism: natural selection.

Dr. Young’s key concept is that bipedal use of hand-held weapons by our ancient ancestors yielded enduring reproductive advantages which drove natural selection in a way that accounts for both human origins and major aspects of the ensuing evolution that led to the emergence of Homo.

This book provides a series of discussions about current issues in the study of human evolution, including human origins, bipedal locomotion, the human hand, early weapons, gender size differences, the transition from Australopithecus to Homo, the acquisition of meat, human handedness, diminution of the canine teeth, robusticity of bone and muscle, development and maturation of throwing and striking, and central nervous control of the bipedal use of weapons.

Two related but unexplored topics are also considered: the structure of scientific explanations and the current absence of a theory of human origins and evolution. Dr. Young shows that this “bipedal use of hand-held weapons” proposal can be formulated as a theory, and furnishes numerous predictions that can be used to test the theory.